The Wolfman vs. The Wolf Man

The new upcoming Wolfman movie got me thinking about the casting for the new film. I put together a few pics comparing the actors playing the main roles.

Lawrence Talbot:
In the role of the tortured soul Lawrence we have Benecio Del Toro playing the part made famous by Lon Chaney Jr. I'm really happy about this choice, as Del Toro has a bit of that rugged athletic quality that Lon shared. 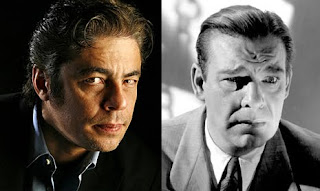 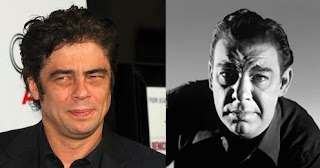 The Wolfman vs. the Wolf Man - note the movies spell the title creature differently. Wonder if they did that just to differentiate them more easily? It is a remake, after all - the one word change doesn't really matter all that much, just is interesting. At any rate the new test shots of the makeup for the wolfman certainly look amazing. They enlisted Rick Baker to do this design, and wow - it totally knocked my socks off. Hopefully the computer effects will be minimal, and they'll rely on makeup more - and the wolfman won't change clothes this time around when he transforms! 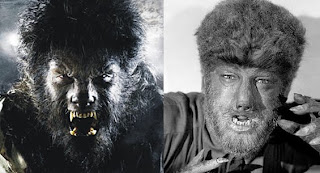 Gwen Conliffe - in the role of Lawrence's love interest we have Emily Blunt playing the Evelyn Ankers role. Emily is gorgeous and sexy, but doesn't really resemble Evelyn too much. But that isn't really necessary for this part, and I think she'll do great in the role.

In the role of John Talbot, Lawrence's father, we have Anthony Hopkins in the Claude Rains role. You need an actor of considerable range to fill these shoes, and you don't get much better than Anthony Hopkins. 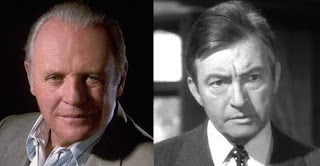 Maleva the Gypsy, originally played by Maria Ouspenskaya, is played this time around by Geraldine Chaplin. I don't know too much about her, but according to IMDB she's been in over a hundred movies, mostly foreign. She most likely has the accent that the role requires, and certainly looks the part. 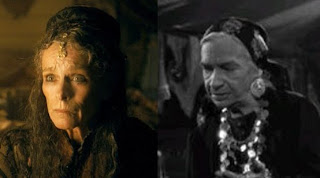 And lastly, in the role of the Inspector Abberline we have Hugo Weaving. Now, this isn't a straight replay of a former character. Best I can tell the new film takes the role of  Colonel Montford, played by Ralph Bellamy (Twiddle, take a note!), and splits it into two characters - Colonel Montford and Inspector Abberline. Montford was the one investigating these murders before, if I'm not mistaken, but this time around we have an inspector to do the investigation. I really like Hugo as an actor, and he'll lend a quirky air to the role. 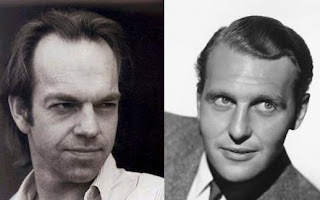 All in all an amazing bit of casting. I am very much looking forward to this movie, as well as the new dvd release of The Wolf Man! Here's hoping they both live up to expectations!