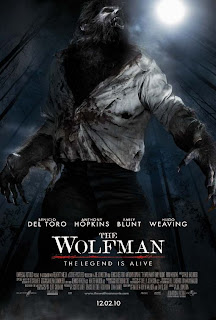 As many of you know, Universal pictures is releasing a new version of The Wolfman to theaters this coming Feb. It stars Benicio Del Toro in the Lon Chaney role as the tortured Lawrence Talbot; Emily Blunt as his love interest Gwen Conliffe, originally played by Evelyn Ankers; and Anthony Hopkins in the Claude Rains role of Lawrence's father, Talbot Sr. Quite the cast, indeed. This promises to be a howling good way to start the 2010 movie season. Release date is February 12th, 2010.