When the Wolfsbane Blooms...

Wolfsbane is mentioned prominently in the poem that is recited several times in The Wolf Man;

“Even a man who is pure of heart,
and says his prayers by night,
may become a wolf when the wolfsbane blooms,
and the autumn moon is bright”
…but what is wolfsbane? I’ve always wondered if it’s a real plant, so I did a little investigation. 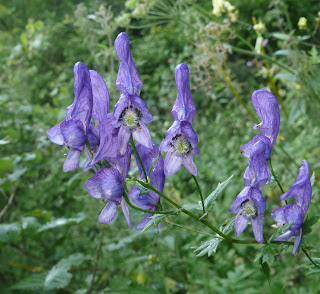 Wolfsbane is indeed a real variety of plant related to the buttercup. Its scientific name is Aconitum, and there are over 250 varieties of this plant. Aconitum grows primarily in the mountainous regions of the Northern hemisphere. It has dark green leaves with flowers of various colors including blue, purple, white, yellow and pink. It is better known by a variety of names including wolfsbane, monkshood, and aconite.

Aconitum is also highly poisonous. According to Wikipedia “... the sap oozing from eleven picked leaves will cause cardiac symptoms for a couple of hours.” In 2004 Canadian actor Andre Noble died during a camping trip after accidentally consuming aconite (the actual poison contained in the plant).

It has been used throughout history in everything from witch’s brews to poison arrows. Various superstitious beliefs have been attached to the plant which, according to the version you hear, have been rumored to cause, cure or kill werewolves and vampires. It is very likely that Curt Siodmak, the writer of the script, heard these legends while growing up in Germany, and decided to incorporate them, thus adding a bit of old world atmosphere to the 1941 film.
at Thursday, January 28, 2010