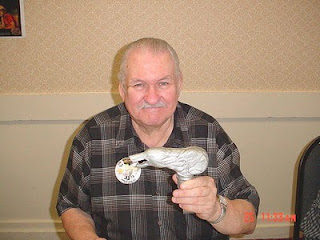 One of the key elements of the 1941 film The Wolf Man is the wolf’s-head cane that Lawrence Talbot picks up at the antique shop in town. This prop is perhaps the single most recognizable element from that film, other than the werewolf makeup (designed by Jack Pierce). That prop is still surviving and well taken care of by avid monster-kid, collector, and friend of mine, Bob Burns.


Bob came into possession of this treasure, one of the gems of his collection, when just a kid. He had a friend in school whose dad was Ellis Berman, a special-effects, makeup and prop man who had worked in several movies in Hollywood. He was also, incidentally, the very person who built the wolf’s-head cane prop from the Wolf Man film. (Ellis had two sons, Tom and Ellis Jr., both of whom worked in films in makeup and effects. I will have to ask Bob next time I talk with him which of the Ellis kids he was friends with).

Bob would often hang out with his friend at the Ellis studio, staring longingly at the wolf’s-head ornament (the wooden stick of the cane had long since been removed, only the top wolf ornament remaining). In Bob’s book “Bob’s Basement” he writes:

"I spent many, many afternoons quietly staring at it. One day (Ellis) said to me, 'You really like that thing, don't you?' Like it? I loved that cane head; it was a real, physical object that had actually been used in one of my favorite movies. 'It's yours. Go ahead and take it,' he said. I thought I would burst as I took it home to put in a place of honor. Thus began my lifelong occupation as custodian of treasures from sci-fi and monster movies."

The wolf’s-head ornament was made of cast rubber and painted silver. It features the head of a wolf in the front, and in the back, a pentagram with a wolf running inside it. The new Wolfman movie, due in theaters next month, also makes use of the element of a cane with a wolf’s head atop it, although I am not sure if it is going to be as prominent of a plot device as in the original film. But it is featured prominently in one of the many posters for the new movie… so I thought I’d place them side by side for comparison. 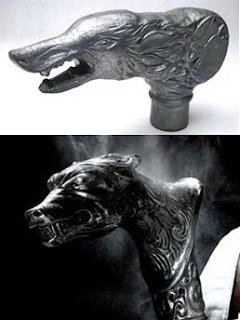 The new cane is changed slightly from the original design. The wolf’s head itself is similar, but more detailed and meaner looking, with longer, sharper teeth. The pentagram with the wolf inside it is gone, which is actually fine. I think the new cane looks really nice and is a very handsome design. I’m glad they’re including it in the new film, and it’ll be interesting to see if that is how Lawrence is killed in the new film. Maybe Bob Burns can get this cane as well to add to his collection beside the Ellis Burman original.

Oh, and speaking of Ellis Burman – I mentioned before briefly about his kids. Turns out the Burman family has a long history of Hollywood filmwork. Ellis Burman was born in 1902 and worked on several really fun genre films: The Wolf Man (property maker: Larry's Silver Wolf Head Cane), Teenage Cave man (dinosaur sequences), Unknown Island (special effects photographer and creator), and The Ghost of Frankenstein (makeup dept. technician). He died in 1974.

Ellis’ son Ellis Berman Jr. is an award winning makeup and special effects technician who has worked on such films and TV shows as: Prophecy, Star Trek films and TV episodes, Back to the Future II & III, The Goonies, Alien Nation, Starman, Terminator and many others.

Ellis’ son Tom Berman is also an award winning makeup and special effects technician who has worked on such films and TV shows as: The X Files, Robin Hood Men in Tights, Mask of Zorro, The Goonies, Teen Wolf, Halloween III, Prophecy, The Thing with two Heads, Howard the Duck, Cat People, Invasion of the Body Snatchers, Frogs and many others.
Ellis Jr. had a son, Ellis Berman III who has worked in sound, music and makeup in such films as: Deceit, Close encounters of the third kind (sound restoration), Night of the Demon (sound restoration), Gone with the Wind (sound restoration), Spacehunter: Adventures in the Forbidden Zone and many more.

Tom had a son named Barney Berman who has worked in makeup, special effects, and acting in such films as: Tropic Thunder, The Ring Two, Constatine, Dawn of the Dead (2004), The Haunted Mansion, Men in Black Two, Fright Night 2, Brain Dead, House and many more.

Quite the talented family and what a great list of movies they’ve worked on!!
at Wednesday, January 13, 2010