The Baron of Arizona 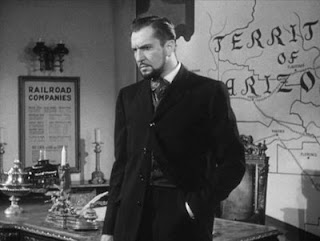 Have you guys seen this movie? When I was making my top ten Vincent Price films list I almost included this one, but eventually decided to keep it to horror movies. While The Baron of Arizona isn't a horror movie, it certainly is one of Vincent's best. 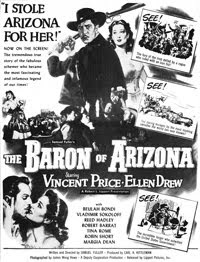 It was made in 1950, written and directed by Samuel Fuller. It's based on a real-life historical figure, James Reavis, who almost swindled the United States out of the territory of Arizona, providing forged land documents indicating his wife was heir to this territory. Vincent really flexes his villain muscles in this one - he is one corrupt, conniving and devious character. If you haven't seen this one, you should definitely track it down. It's available on dvd and Turner Classic Movies shows it from time to time as well. Definitely worth watching.