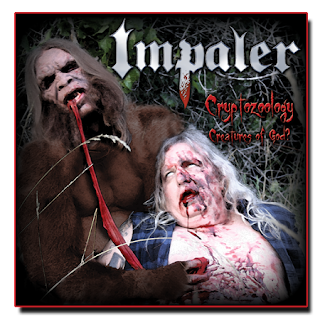 I first "met" Impaler back in the early 2000s. I say "met" in quotation marks because I got to know lead singer Bill Lindsey through the internet. We swapped emails and cds, dvds, and music over the years. I finally got the pleasure of meeting Bill and the rest of the ghouls last year when my band, Spookhand, opened for Impaler at Nashville's Springwater club. Let me tell you, a nicer bunch of guys you couldn't ask for. They were a fun bunch and really had the place rocking! It was a great time.

Little history about Impaler - they have been at this since the early 80s. They were one of the bands that got Tipper Gore all riled up, back when she had the whole PMRC thing happening. They were one of the bands whose album covers, (and yes, they were albums back then), were shown in congress during those whole ridiculous congressional hearings about how evil rock music was warping our children. What a badge of honor! You can also see one of their covers in the movie "Trick or Treat," in the stack of movies Eddie has at his house.

Yep, they've been doing this for quite a while, bringing the shock rock show to the masses - and I'm happy to say they'll be back in Tennessee again next month, on March 27th, and my band will be opening for them again, along with The Creeping Cruds. Bring on the horror!!

So go by www.impalershockrock.com and grab a copy of cryptozoology - or else I'll send the Chupacabrs after you!!
at Thursday, February 11, 2010