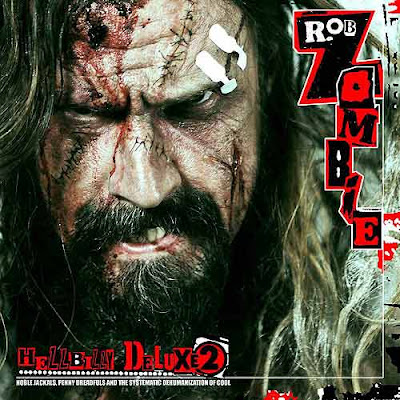 It’s called Hellbilly Deluxe 2 and was released Feb 2nd 2010. This is a follow-up CD to Rob’s first solo effort, Hellbilly Deluxe, released in 1998. I got my copy from a Barnes and Nobles at a local mall for right around 10 bucks. Not bad at all.

Hellbilly Deluxe was a breakout album for Rob. He had outgrown White Zombie and was ready to branch out on his own. The songs on that one are classics he’ll be playing for years… Superbeast, Living Dead Girl, Dragula, Demonoid Phenomenon,Spookshow Baby - Great stuff that really brought horror movies and comic book subculture to the mainstream public in a way that hadn’t been done since Alice Cooper’s heyday. There are a ton of other bands out there flying the horror banner high, don’t get me wrong, but none that have that massive fan base and a major label behind them, and certainly none getting mainstream airplay like Rob does.

On both Hellbilly Deluxe and the 2001 follow-up, The Sinister Urge, Rob is drawing deeply from that horror well. Like a rock and roll shaman or a musical version of a classic horror host, Rob guides his listeners through song after song of monsters, B-movies, sex and gore. Which is kind of a fitting description, actually, as Rob has even done some horror hosting in his time, hosting a series of movies for none other than AMC TV.

But on the album Educated Horses from 2006, Rob seemed to step away from this shock rock horror host persona a bit. The album seemed a bit more subdued and in fact Rob doesn’t even appear in trademark costume or makeup on that cover. It is more of a rock album and less of the techno-industrial metal sound from the previous two CDs. Perhaps he was going for a more adult sound, or just channeling whatever influences he had going on at that time. But either way, it was a bit disappointing of an effort for me.

But I’m happy to report that on the new CD, Hellbilly Deluxe 2, Rob is back in the horror swing full force. There are 11 tracks on this one, and once again Rob has fully embraced that horror persona that made him so successful. This is Rob Zombie the entertainer, the monster, the horror host.

The full title of the CD is: Hellbilly Deluxe 2: Noble Jackals, Penny Dreadfuls and the Systematic Dehumanization of Cool - which is a fitting title as it summarizes the horror movie and pop-culture influence on this disc. Rob Zombie makes horror cool. Wrapped in danceable techno-tinged head boppin’ riffs, Rob’s music runs the gamut of nerdsville and tells us this is what’s cool, not your plastic, popular, pretty-people but your dirty, grimy, blood spattered b-movies. The songs on this disc cruise through topics as diverse as lyncathropy, witchcraft, slasher films and even a tribute to Lon Chaney Sr.
Werewolf Women of the SS is my favorite track off this disc and I swear it sounds just like it could have come off of those first two CDs. This song is titled after the fake movie trailer Rob did for Quentin Tarintino’s Grindhouse film. Man, I wish Rob would make this movie. What a great exploitation flick this would be. Sexy women, evil Nazis, shape shifting werewolves – man that’s right up Rob’s alley, I’d think. Rob, man, you really should consider making this movie!

While Hellbilly Deluxe 2 may not be as strong of an album as either the original Hellbilly Deluxe or The Sinister Urge, it is nonetheless refreshing to see Rob return to his horror roots. Definitely a worthy addition to the Zombie catalog, and let me tell you – if Rob comes to your town live you should do yourself a favor and go see them. The band has kept the same 4 members over the past few releases and it shows. They are super tight live and John Five is a kick-ass guitarist. Their stage show is a visual assault of flashing lights, horror movie imagery, cartoons and sexy women. If this is juvenile fare then I don’t wanna grow up!