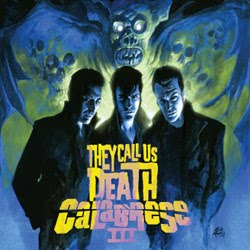 The band Calabrese have a new album coming out March 20 - Calabrese is one of the coolest horror punk bands around. I got a chance to see them this past year at Eric Powell's (creator of The Goon) birthday bash - the guy knew how to throw a birthday party - he rented the Cannery and brought in Calabrese and Ghoultown, two of my very favorite bands. Eric and I go way back - back before I was doing this gig as a horror host I used to work in the comic book field, and one of the first folks I had the pleasure of working with was Eric on an anthology I published, alongside my business and creative partner Chuck Angell, called Best Cellars.

Anyway, the new Calabrese cd is called Calabrese III - They call us Death. You'll be able to order it off their website and they're even taking preorders now. Go get yours today and tell em' Dr. Gangrene sent ya... and by the way, it even has a cover by Eric Powell on it. Way cool!

Here's the music video for one of my favorite songs of theirs - Voices of the Dead. Rock on!

Email ThisBlogThis!Share to TwitterShare to FacebookShare to Pinterest
Labels: Calabrese, Dr. Gangrene, Eric Powell, The Goon, they call us death, voices of the dead