With the Rondos coming up I was thinking about my choice for best film of 2009. Best film is always the very first category on the Rondo ballot, and I hazard to guess it’s probably the one that garners the most votes every year. This category is for new movies with a large theatrical release. Past winners include The Dark Knight, Pan’s Labyrinth, King Kong, Lord of the Rings, etc. 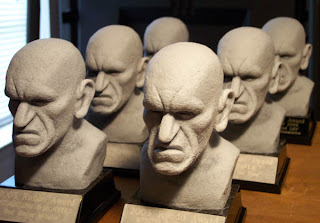 So what is my choice for Best Film of 2009? Before I tell you, I have to admit I don’t really vote for a best movie but instead for the one that was my favorite film. It might be splitting hairs there, perhaps, but I’d rather cast my vote for the movie that I enjoyed the most, rather than the most technically proficient film. Sometimes they might be the same, but most often they aren’t, and I think that speaks to my own taste in movies more than anything else.

This year’s vote really came down to two movies for me – both horror movies. I love that there were legitimate horror movies in the theater last year that weren’t simply slasher films. Nothing against those, they certainly have their fans and their place, and I enjoy those too. But it isn’t every day you have one, much less two movies like the two I was torn between – Zombieland, and Drag Me To Hell.
Both of these were great movies that pulled off that always tricky balancing act of combining horror and humor, which is really my favorite type of movie. I really, really loved both of these movies, but in the end there could be only one, and my choice was… 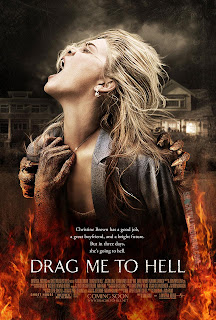 Sam Raimi’s return to horror – Finally! I love the Spiderman movies but it’s about time Raimi does what he does best, horror! This film has all the elements that made the Evil Dead films such a smashing success. It is a quirky, intelligent, funny, horrifying thrill ride – pure Raimi. 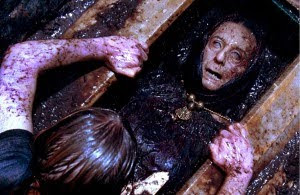 If you haven’t seen this one you should definitely track down a copy and watch it. It is a movie that didn’t get anywhere near the recognition it deserved. Honestly, it’s the kind of movie I really didn’t think I’d ever see in the theaters again – a big budget movie with an independent spirit about it. AND it has another element that I’m a real sucker for… gravedigging. I don’t know if it’s a throwback to all those EC style horror comics I grew up watching or what, but toss in a scene of someone digging in a graveyard and I’m hooked. good stuff - highly recommended!!
at Thursday, February 18, 2010