Ghoultown tribute to Elvira, Mistress of the Dark

Cowpunk.   Hellbilly.  Psychobilly. Take your pick – but whatever term you use to describe Ghoultown one thing is certain – they will rock your cowboy boots off. 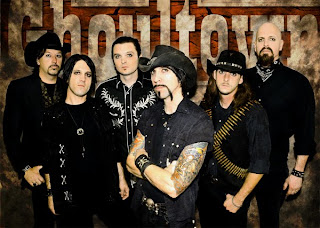 I first got in contact with Count Lyle, lead singer of Ghoultown, through the internet sometime around early 2000. Their video for the song “Killer in Texas” was one of the very first music videos I ever showed on Chiller Cinema.  It is a sepia toned rocker about a crazed Texas serial killer, full of gory imagery and busty babes. Needless to say I loved it and played the hell outta it!


I finally had a chance to finally meet the ghouls of Ghoultown in the flesh this past summer. They came to Nashville for Eric Powell’s Goon show, along with Calabrese and local act The Protomen. I am happy to say that Count Lyle, Ghoulette Sandy, and all the guys from Ghoultown was every bit as friendly in person as he had been over the internet, if not more so. We really clicked and got along as if we’d been friends our entire life. The rest of the band was equally nice, and let me tell you, they put on one heckuva live show! 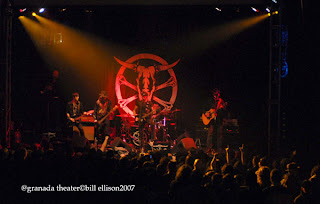 The band was dressed head to toe in authentic cowboy attire – hats, boots, vests and attitude. They played to a packed house at the Cannery Ballroom, and let me tell you, that place is BIG. The crowd was going crazy and shot after shot of tequila was bought and passed onstage for the band! I don’t know how they could keep track of what they were doing with that much firewater coursing through their system, but it was one of the tightest sets I’ve ever seen. If Ghoultown ever passes through this way again, you can guaran-damn-tee  I’ll be there! 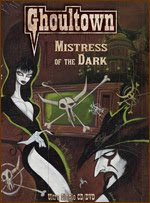 Most recently Ghoultown has put out a CD/DVD combo that’d make any red blooded American male stand at attention and drool in delight. It is called Mistress of the Dark and it’s a tribute project for the one and only hostess with the mostest, Elvira! The guys were invited to write and perform a new theme song for the mistress of the macabre, and shot a music video for the song featuring Elvira, too.


Mistress of the Dark is a limited edition special DVD (only 2000 copies). It features a music video for the song “Elvira” by Ghoultown, a making of the video featurette, a storyboard to video special and an episode of the Har Har show featuring Ghoultown. The Har Har show is a take off on the Hee Haw show-in the music video Ghoultown is performing on the Har har showwhen they play the song, Elvira. They expanded this and included it as an extra on the dvd! 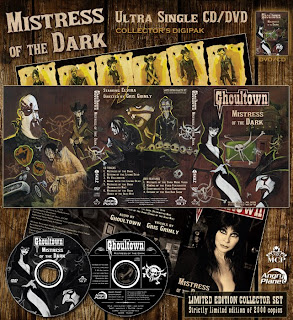 The CD has 6 tracks including 3 mixes of the Mistress of the Dark, a new version of Return of the Living Dead (one of my favorite Ghoultown tunes), and the new songs My Halloween and Drink with the Living Dead. This is definitely one DVD/CD that is well worth picking up, and should be an instant collector’s item, too.
To get yours go to www.ghoultown.com/music.htm and tell em’ Doc Gangrene sent ya!