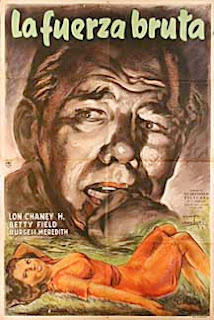 Movie studios were determined to make a star out of Lon Chaney Jr., to capatilize on the Chaney name. He was cast in various small parts over the early years of his career, in an attempt to build his stock. In fact he was cast in close to 60 films during that time, for a variety of studios before being signed to his Universal contract. The role that catapulted him to fame was the role of Lennie in Of Mice and Men in 1939. He was terrific in the part and reviews were wonderful.

When the film was cast Broderick Crawford was initially scheduled to play the part of Lennie. Crawford had previously played this role on Broadway in 1937, to much critical acclaim. However, a last minute substitution by director Lewis Milestone gave the part instead to Lon Chaney Jr., who had played that role in the West Coast theaterical version earlier that year. What's even more ironic is that Chaney got the theatrical role due to Crawford bowing out. Several of the Broadway actors had been signed to reprise their roles for the West Coast production, but Crawford left to pursue other endeavors. Talk about crossed paths!

Two years later Lon and Broderick found themselves working together for the first time on the film Badlands of Dakota. In total they would work together on 5 films: 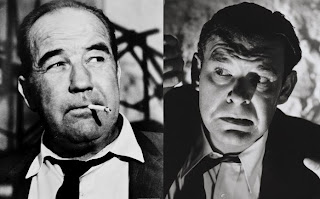 The two became fast friends and drinking buddies. Over the years they became closer and even went on hunting and fishing trips together. They got along great while sober, but once they started hitting the bottle things got a bit rowdy. They were both large guys, standing over 6' tall with husky frames. They'd get drunk and start wrestling and fighting each other. On the film North to the Klondike the two shared a dressing room. After one such drinking and brawling incident there was damage to the room, which was subsequently reassigned to costar Evelyn Ankers. This behavior continued through the years - on the set of their last film together, Not as a Stranger, their backstage fighting continued and reportedly another room was destroyed. I've even read reports that Broderick was tossed off a balcony during that shoot, although I wonder if maybe that isn't a bit of an exaggeration.

I wonder if deep down Crawford felt somewhat of a chip on his shoulder toward Chaney. Lon had lobbied director Lewis Milestone directly for the role of Lennie, and after reading lines with the actors Milestone agreed that Chaney was the right choice for the part. To have the role yanked out from under him and given to Chaney had to smart somewhat. Perhaps some lingering anomosity on Crawford's part fueled these fighting incidents.

After a late night of heavy drinking what started in fun easily could have turned personal - insults begin to fly, bravado takes over and next thing you know fists are flying. The fact they were able to put it all behind them and remain friends in the morning is amazing. But that's exactly what they did, and this friendship lasted till the day Lon died. Crawford, knowing Lon was sick, even visited him at his house before he passed away at age 67.
at Tuesday, February 09, 2010