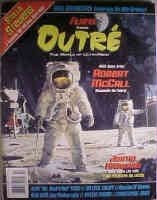 Thinking about Sir Cecil from my earlier post, I thought you guys might enjoy reading an article I wrote about him. This was originally published in Outre Magazine #21.

Nashville Tennessee is probably best known for country music and line dancing. But here in Music City there is much more to offer than just country music, even some things of interest those of us who thrive on horror and all things creepy (believe it or not there are some things to come out of Nashville that are even more frightening than Marty Stuart!).

During the seventies it seemed every city had its own version of ghoul that would entertain audiences once the sun went down. I'm speaking, of course, of those late night horror hosts, and the host that is perhaps best remembered by the populace of Nashville, TN is Sir Cecil Creape (pronounced Ses-cil Creep). Sir Cecil was played by Russ McCown, a film editor for WSMV, Channel 4 in Nashville. McCown had a long history of camera work and film editing - In fact, he was the person who shot the very first color commercial in Nashville in 1956.

Russ got the name of Sir Cecil from Cecil B. DeMille, the late great actor/director of such movies as "The Ten Commandments." Every Saturday evening at 10:30pm Creature Feature would air, and once more Sir Cecil would descend the stone staircase into his dungeon set to utter the words "Did someone call?" in his unmistakable droll. His show aired from 1970 through 1973 and influenced many a young viewer, including one young spook who is writing this article.

Sir Cecil was quite the character; Russ was a short, round little fellow, bald on top with just a bit of hair on the sides. He wore a dark blue cape with a huge purple collar and a chain mail tunic. He had a hump back and walked in a slow, lurching style, playing up to the physical characteristics of McCown. He had a large scar across his forehead and wore a monocle in one eye. He also wore a set of deformed teeth, a custom made denture set designed by his dentist. He always carried a strange looking lamp in one hand, one that was custom made for him by a friend who worked at Aladdin Industries. It was made from parts salvaged from various Aladdin Lamps. Russ described his character as "a cross between the hunchback of Notre Dame and Oliver Hardy."

The show achieved great popularity in the Nashville area, and many kids would stay up late at night to hear the creepy introduction to Creature Feature... "Each of us carries upon his shoulders this bony sarcophagus, the grinning face of death. Within it resides the human brain, encompassing within its pulsating grey mass the totality of the cosmic consciousness. What a delicate instrument; capable of thoughts of inexpressible beauty, but often enslaved in mindless terrors by monstrous horrors that the mind cannot fathom, and indeed, horrors that may not exist except within the bony confines of the human brain box. This is Creature Feature... exploring the realms of the unknown. And now, from deep within the catacombs beneath our studios, here is your master of terrormonies, Sir Cecil Creape."
What many fans didn't realize, however, is that there was more to that introduction than merely an atmospheric opening speech - it was actually read by none other than Ken Bramming, Nashville's first horror host, Dr. Lucifer. Ken and Russ were good friends, and when Russ started his show he asked Ken to voice the introduction, which he was happy to do. (Ken's voice is still heard on the Nashville airwaves each evening, even though Ken has passed away... He did a series of station IDs for WAMB 1040 am, which are still played late at night.)

The set for the Creature Feature was a dungeon that was supposedly deep beneath the studios of Channel 4. It had rock walls and a large bookshelf, on which rested a few books, a skull, and one very interesting article... a framed picture of Floyd Kephart, political analyst in Nashville during the seventies. For some reason Russ thought it was funny to have a picture of Floyd on the mantle, and would refer to Floyd from time to time with such jokes as "Suffering Kepharts," or "That is almost as frightening as Floyd Kephart." There was always a steady drip, drip, drip sound in the background of his shows.

Brenda Jordan, Programming Director for WSMV, used to be Sir Cecil's secretary and would help answer his fan mail. She recalls "One thing many people don't remember is that many of the scripts were actually written by Pat Sajack." That's right, Pat Sajack, THE Pat Sajack, as in The Wheel of Fortune, dabbled in horror long before he achieved fame as a game show host. He worked at WSMV at the time as a Booth Announcer and part-time weather man. And you thought The Wheel of Fortune was scary!

The show was filmed live and broadcast from a closed set. Sir Cecil would come out, introduce the film, perform little skits and show movies between breaks. The movies he showed were first rate films, such as "The Beast with Five Fingers" and Universal classics. He was a host with a great sense of humor, often laughing aloud at his own jokes in his silly broken laughter "Ah - ah - ah." One thing he always mentioned was his hatred of those cursed commercials, which he would hesitantly cut away for.

In 1973 the show had run it's course, but that was not to be the end of Sir Cecil. The good ghoul of Nashville would go on to host another show at TNN, a cable division of Opryland and Gaylord Entertainment. It was called "The Phantom of the Opry," and that would be the other moniker Sir Cecil would become known as. (His automobile even had a license plate that read "Phantom.") Once again donning the cape, tunic, monocle and teeth, Sir Cecil Creape hosted movies at TNN from September 1983 - 1985.

The intro showed Sir Cecil flinging open the doors of the Grand Ole Opry during a driving rainstorm, walking through the huge auditorium, crawling down a ladder into tunnels below and making his way through them to his set. This time the set was nowhere near as spooky, consisting of stucco walls, a flat wooden table, chandelier and bookcase. He did, however, still have a set of stairs he would enter through. The show was geared for a younger audience, and the scripts weren't nearly as entertaining, having lost the creepy edge of Creature Feature. He once again would break up the movies with skits, and continued his tirades against the advertisements. They filmed thirteen episodes of The Phantom of the Opry, during which Sir Cecil hosted mostly "B" movies such as "Monster Maker" and Roger Corman's "The Little Shop of Horrors."

The show ended in 1985 and Russ settled into semi-retirement. He went on to star in a series of commercials for which he would become almost as well known in the Nashville area as Sir Cecil. The role was Elrod, a country farmer, for the Elrod and Elvira commercials for the Tennessee Department of Tourism. To this day people still remember those commercials. Russ McCown passed away in early 1994, at the age of 65. Sir Cecil Creape and Creature feature will forever be remembered by those of us who watched him as the coolest ghoul in Nashville. I'll sign off as Sir Cecil did each week..."Good night, sleep tight, and don't let the beddie bugs bite."

Larry Underwood, author of this article, is a current horror host in Nashville, TN and the surrounding areas. He plays Dr. Gangrene weekly on Chiller Cinema on Nashville's cable access Channel 19, Fridays at 8pm and Saturdays at 9:30pm. The show airs in Hendersonville, TN Thursdays at 8:30pm. You can check out the Chiller Cinema website at http://chillercinema.tripod.com.
at Saturday, February 27, 2010