A Match made in...well, somewhere!

Lon Chaney Jr. and Evelyn Ankers appeared together in a total of 8 movies, all for Universal Studios. The first of these to hit the screens was The Wolf Man in 1941. But the first movie they shot together was North to the Klondike, filmed earlier that year and released in 1942. 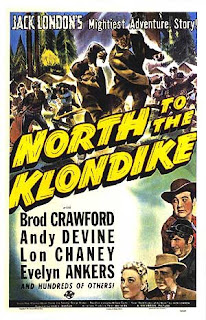 Lon and Evelyn's dislike for one another is well documented. I think they probably would have gotten along better if the Wolf Man had been shot first, but things got off on the wrong foot during Klondike. Boys will be boys, they say, and one of the other stars in this movie was Broderick Crawford; he and Lon didn't exactly bring out the best of one another. They were both heavy drinkers and putting the two of them together was asking for trouble. In addition they shared a dressing room, and one night while drinking began brawling and destroyed the room. The studio in turn reassigned this room to Evelyn Ankers, which didn't exactly endear her to the fellas. 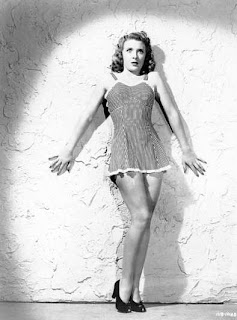 According to Don G. Smith in his book "Lon Chaney, Jr. Horror Film Star" Crawford was offended, and later greeted Evelyn on set "...with a hearty 'Hiya Kid!' while slugging her in the arm with a good natured jab. The blow immediately cramped Anker's arm, sending her into tears. The tears, in turn, sent mascara into her eyes, creating an irritation that lasted for two days." Chaney laughed at the incendent which further angered Evelyn. 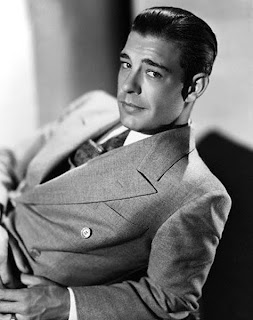 The boorish behavior and drinking naturally put off Evelyn, and who can blame her? She was trying to build a career and act like a professional. The hard feelings continued throughout their careers. At a publicity event for Universal Studios a drunken Chaney got into a near fight with Evelyn's husband, actor Richard Denning. It must have made things somewhat difficult on-set but there is no denying their on-screen chemistry.
at Monday, February 01, 2010