Recommended Movie of the Week - Slither 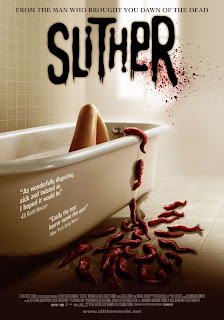 I was out late last night traveling back from my son's basketball game. It was an hour and a half away, and since we got back late I was kinda tired and just didn't even get on the computer (their team lost but my son got a slam-dunk, so that was nice).

Anyway, just getting around to posting something here, and I thought I'd put another recommended movie of the week on here... now this series is one where I don't review a movie so much as just say hey, this is a film I like and think you should watch too. Sometimes it's a movie that is kinda rare, other times it isn't.

This week I recommend the movie Slither, by director James Gunn. Slither was made in 2006 and stars Nathan Fillion, Gregg Henry and Elizabeth Banks, who I seem to see quite a bit lately on Scrubs reruns. It's a modern horror movie with a classic 80s monster movie feel to it. Slithering worms from outer space, mutated disgusting infected humans, and shambling zombies - this is a very well made and a really fun movie!

So if you missed this one you should take the time to track it down and watch it. Highly recommended!
at Saturday, February 06, 2010