The Wolfman one howling good time!

I finally saw The Wolfman yesterday afternoon and really enjoyed it. My 12 year old son Luke and I headed out to a 1pm matinee - we got a couple of cokes and big buckets of popcorn and settled in for an afternoon with Lawrence Talbot. 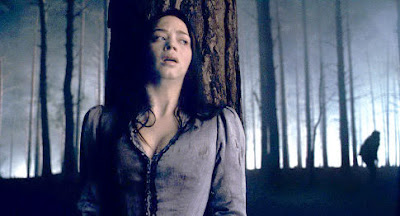 OK - on to the movie... I'm going to try and do this without giving away any spoilers.

I thought the movie worked really well. Setting it in the 1800s was perfect - it gave it that classic feeling the best Universal movies have. That time period is such a great, fertile period to set movies in anyway - the Industrial age was such of a period of discovery. Science was booming, but everything wasn't figured out yet. It almost seemed more like sorcery than science. And the days of superstition weren't that far removed... Having a band of roving gypsys in the movie is still a feasible plot device. The new Sherlock Holmes movie is set in this same time period and it worked really well there too.

But getting back to the Wolfman, the most impressive thing of all was the werewolf makeup. It really looked terrific. Rick Baker designed the look of the wolf on the Jack Pierce design then made it more ferocious. It was really, really well done. I have read that some people were put off by the computer graphics in the movie. really? Did you think you'd go see a werewolf movie in 2010 and not see computer graphics in it? That is the technology we work with today. Is it any more fake looking than the time-lapse dissolve between Jack Pierce makeups in the 1941 version? Of course not.

Anthony Hopkins is his usual brilliant self in this. The sets are fabulous. The tone of the film is very dark and the is a lot of gore in it. Overall, I was pretty pleased with it. Couple of things I'd have changed but then that's true of almost any movie. Definitely well worth the price of admission. Go see it in the theater on the big screen - you won't regret it!
at Sunday, February 14, 2010